How to install OpenCV and NumPy?

To install OpenCV You have to download the OpenCV program and run it on your computer and install it as normal installation.

To install NumPy you have to run the following comment in your command prompt or terminal (for Linux or Mac users) then it will be installed.

There are main two operations in Morphological Transformation:
1.Erosion
2.dilation

The Python code for Morphological Transformation:

Now we are showing the outputs of the basic two operations Erosion and Dilation. 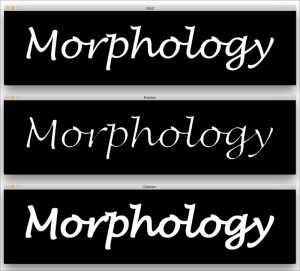 Study the images carefully, Youll definitely understands the differences between these two. Please try other operations on your own in your machine, It’ll be interesting. Thank you.