How to plot ROC Curve using Sklearn library in Python

In this tutorial, we will learn an interesting thing that is how to plot the roc curve using the most useful library Scikit-learn in Python.  This tutorial is a machine learning-based approach where we use the sklearn module to visualize ROC curve.

What is Scikit-learn library?

What is the ROC curve?

What are TPR and FPR?

For further reading and understanding, kindly look into the following link below.
https://developers.google.com/machine-learning/crash-course/classification/roc-and-auc

Step 1:
Import all the important libraries and functions that are required to understand the ROC curve, for instance, numpy and pandas.

Step 2:
Define the function and place the components.

NOTE: Proper indentation and syntax should be used.

Step 3:
Now use the classification and model selection to scrutinize and random division of data.

Step 4:
Now use any algorithm to fit, that is learning the data.  However, I have used RandomForestClassifier.

Step 5:
Now plot the ROC curve, the output can be viewed on the link provided below.

The output of our program will looks like you can see in the figure below: 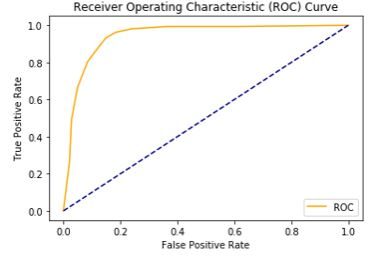