In this article you are going to learn multiple line plot in Python using seaborn module.

Visualization makes the data easy to understand because through it we can generate any kind of insights from the data be it mathematical, statistical, etc.

Dataset link is given at the bottom of this tutorial.

That is the power of Python visualization libraries which can portray the entire story of data in just a few plots. Python has a lot of features to visualize the data. It offers a plethora of data exploring and visualizing opportunities. It has many built-in modules used for visualization like matplotlib, seaborn, plotly, etc.  Working with the seaborn library is more interactive than matplotlib due to a vast variety of plots and features it offers. Multiple line plot is used to plot a graph between two attributes consisting of numeric data.

For plotting multiple line plots, first install the seaborn module into your system.

pip manages packages and libraries for Python. It additionally installs all the dependencies and modules that are not in-built.

Just a single pip install command gets all your installation work done. That is how concise Python is!

Type the following command in your terminal.

Importing the required modules and packages in Python using the ‘import’ command.

For working with this dataset, we need to import pandas, matplotlib, and seaborn module.

A picture is worth a thousand words. With advanced tools, such a picture is drawn in just a few lines of code.

Seaborn module contains a function ‘sns.lineplot()‘, through which we can plot a single line and multiple lines plot using its parameters. Line plots work well when you want to analyze changes in one variable concerning another

Let’s begin with importing the CSV dataset on which we are going to perform the visualization. This is done through Python pandas which reads the CSV imported and converts it into a dataframe object which can be manipulated when required. We have imported an automobile data set with prices and different types of automobiles with various other characteristics.

In the above code,

check the size of the data frame:

shape method defines the size of the data. It gives the number of rows and columns in the dataframe.

horsepower and price are two continuous data variables in our data set. Let’s analyze the relationship between these two variables through a simple line plot.

plot the graph between the horsepower and price.

Here, it plots multiple lines on the same graph. We differentiate between them specifying a label. This label shows up at either corner of the image. If we want to use multiple line plots of seaborn for exploring the relationship between two continuous variables, we need to use hue argument. hue takes as a parameter a variable name according to which data is segregated. It renders different line plots for the segregated data.

plot the graph between horsepower and price according the fuel-type 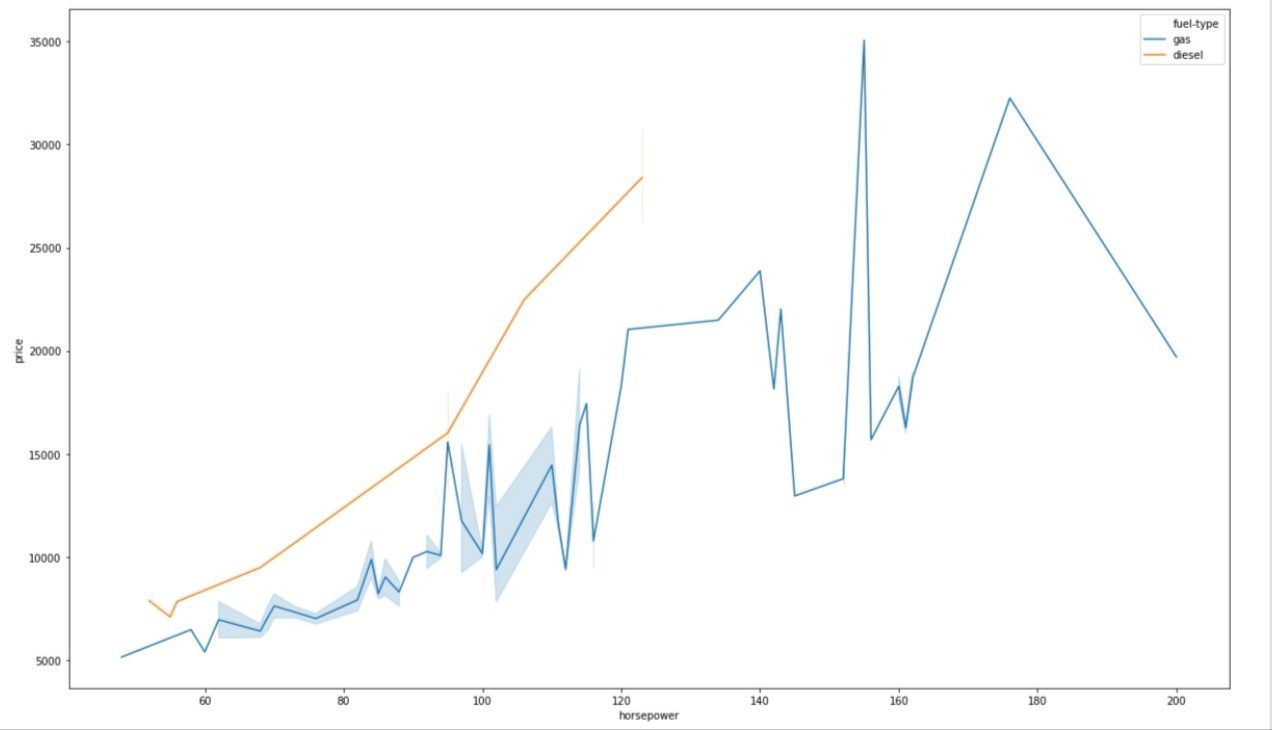 plt.figure() specifies the size of the figure we want to create.

Through this plot, we got to know that there is a kind of linear relationship between price and horsepower as we have seen earlier. As horsepower increases, the price of the vehicles increases as well. What’s different in this data is the hue argument. By specifying fuel-type in hue, we segregated the data into two groups, one with all the vehicles that run on gas and another set of diesel-driven vehicles. We get two line plots in the above figure. The orange line represents the relationship between price and horsepower of all the vehicles with fuel-type as diesel and blue represents all vehicles with fuel type as gas.

The small rectangular box at the top right corner giving information about the type of line is a legend.

Now, we can easily say that a diesel type vehicle with a horsepower power of 120 has a price value of somewhere around 25000.

For downloading the automobile data set and creating your visualizations, click on the link mentioned below: