This tutorial will teach you how to plot categorical data in Python using the Seaborn library.

Seaborn is a data visualization library based on matplotlib and you can use it to create beautiful, detailed graphs using Python.

If you have seaborn already installed on your system, you can skip this step.

To install Seaborn, you can refer to the following page:-

First of all, we will import the required libraries before using them.

The ‘as’ keyword creates an alias. So, whenever we want to use a function from seaborn, we can just use ‘sns’ instead.

What Is Categorical Data?

Categorical Data is nothing but data that has categories, as the name implies. For example, we can consider gender to be categorical data (male and female). Similarly, hair color, skin tone, etc are all examples of categorical data.

Categorical Data can be plotted in many ways. In this tutorial, I will be showing you how to plot categorical data using bar plots as it is very commonly used.

We can plot categorical graphs in various different ways. In this tutorial, I will be using a dataset that represents the information about the people that were on the Titanic when it tragically sunk.

I will recommend you to download this dataset from the link below:-

This code will create a bar plot that shows the number of females and males that survived in the Titanic tragedy.

The ‘sns.load_dataset’ function loads a dataset into a variable. The ‘sns.barplot()’ function plots the graph and shows the output. 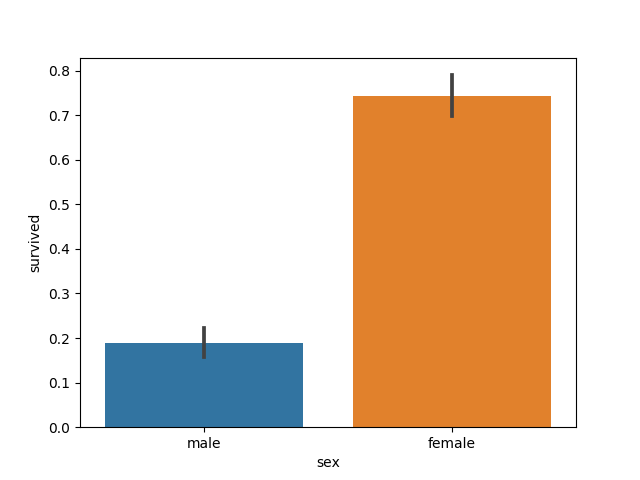