It is a very simple algorithm with only a few modifications from Linear Regression. The algorithm is as follows :

In LWLR, we do not split the dataset into training and test data. We use the entire dataset at once and hence this takes a lot of time, space and computational exercise.

We use Kernel Smoothing to find out the weights to be assigned to the training data. This is much like the Gaussian Kernel but offers a “bell-shaped kernel”. It uses the following formula :

We use the following formula to find out the values of the dependent variables :

Please follow the following link to see the entire code :

The results for the tips.csv dataset is : 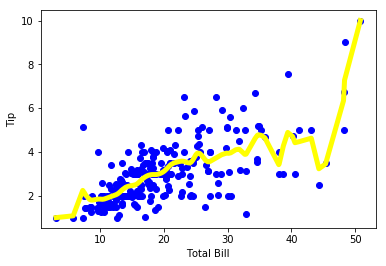 This is a very simple method of using LWLR in Python.

Note: This algorithm gives accurate results only when non-linear relationships exist between dependent and independent variables.