Prerequisites: Basic idea of Classes and Objects in Python

NOTE: All programs in this post are written in Python 2.7.x

Polymorphism is one of the prime aspects of an object-oriented programming language like Python. The English dictionary defines polymorphism as

the condition of occurring in several different forms.

This post, however, deals with operator overloading in particular.

Operator overloading refers to the ability to define an operator to work in a different manner depending upon the type of operand it is used with.

A very noticeable example of this case in Python by default is the difference in the result obtained when using the ‘+’ operator with strings and numeric data types. Consider the following program,

The output is as follows,

Operator overloading can be implemented by a programmer for objects of user-defined classes for most operators (arithmetic, bitwise, relational, etc.). This way, whenever the particular operator is used with an object of this class, it behaves according to definition for operator overloading in the class. Note that though there is a proposal, logical operators cannot be overloaded in Python as of now.

There are specific method names for operator overloading in Python. It is a unique name for each operator. The user can provide a custom definition for the method with that name inside a user-defined class. Below is a table, listing those functions for some of the operators 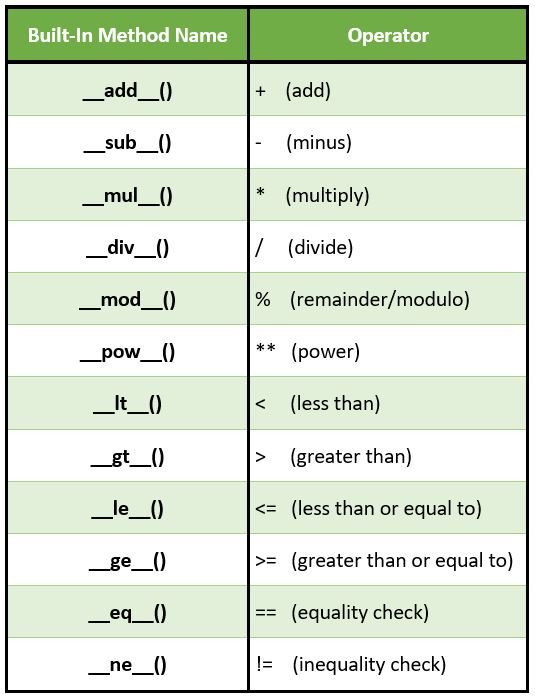 One point to keep in mind is that the methods used in operator overloading are not called like other usual methods. Notice the main part of the program. In the line containing c1+c2, both c1 and c2 are objects of the complex_num class. Since the ‘+’ operator is used between them, the corresponding function (__add__()) defined in the class is invoked. The first operand serves as the calling object and is passed as the argument self. The second operand is passed as the second argument – named obj in this program. In a similar manner, other operations call their corresponding functions if redefined in the class

Now let’s understand the above program step by step

The class is simply used to operate on complex numbers.

Complex numbers can be added by adding their respective real and imaginary parts.

Complex numbers can be multiplied by simply applying the distributive method. (a+b)(c+d) = ac + ad + bc + bd. Further multiplying i*i gives -1. So this concept is used in the implementation of the multiplication function.

Complex numbers raised to a power is simply repeated-multiplication of the same number.

Complex numbers are said to be equal if their real and imaginary parts are correspondingly equal.

Implementation of the Logic

The assign() function simply assigns the real and imaginary parts of the complex number.

The function also creates a local object – temp, of the complex_num class and the added imaginary and real parts, are stored in the respective parts of temp. Hence temp now becomes another complex number which essentially holds the sum of c1 and c2. This is similar to adding two integers a and b and storing it in c (c = a+b). Finally, temp is returned by the function, which like any other function replaces the function call. Since the function call is in a print statement, the returned object gets printed.

Here, temp is assigned to a unit complex number first i.e 1+0i. Then a loop is used to multiply the complex number the required number of times. note that here the second operand passed as an argument is used as an integer and not as an object of the class. The definition can, however, be modified accordingly if a complex number is going to be passed. As in the previous methods, the temp object is returned and printed in main.

In this function, the complex numbers are checked for equality. This function, unlike others, does not return an object of the same class but simply return True or False depending on the evaluation like any other relational operator. Nevertheless, the function can be defined to return any other data type like say a string.

The following is the output of the program

So that clarifies the use of all the overloaded operators.

Hence this way, the program manages to define the use of some of the operators for objects of the complex_num class. These operators otherwise would return an error when used with objects of this class, since the functionality for these operators under the given circumstances is not defined. The programmer has the liberty to make use of the built-in operators to perform the kind of operation one needs for the program.

Further note that, the second operator need not be of any specific data type. And since python does not necessitate mentioning the data type in the argument list of a method, any type of data type can be passed as an argument. However, the function must be defined in such a way so as to handle the data type received as the argument. It’s worth mentioning that the first operand must be an object of the class whose operator functions we wish to invoke because that serves as the calling object.

Feel free to drop off any sort of suggestions or queries below.