Loop through array items in Django

In this tutorial, we will learn how to loop through array items in Django. You might have implemented loop through objects in Django to iterate over object items.

If you are a Django user, you might have used it at least once to iterate over items.

We will complete this task by following the below steps-

So before you proceed you have to create a project and an app to iterate over array items.

Next, move into the project and start an app using- python manage.py startapp app

The very first step in this tutorial is to define the path or the way to navigate into the function for the assigned task. Before defining the path, we need to import views from our app. So let’s import views as from app import views

Next, define the path path("",views.loop_array),

This line means that whenever we will start the server at the localhost, it will take us to the function in views named loop_array.

The code under views.py is as follows-

This function has initialized array and then it renders index.html with the arguments as arr.

Iterate over the items in Django

The array created above has 10 characters to iterate over. We already have discussed the syntax at the beginning of this tutorial, now its time to implement that syntax and get it on the output screen. Create a directory named as templates under your app, inside the templates create an HTML file named index.html. Use for loop to iterate over items as-

We have successfully completed all the major steps to iterate over our array elements, now we should get out output, right. Wait, Wait still we have not set up the complete pipeline, we still are lacking over somewhere. If you run your server now, you might have encountered an error TemplateDoesNotExist. Why so? We have followed all the steps, we have templates, we have an index file, defined the URL, created the function too, but we haven’t installed our app, so our Django doesn’t know from where to fetch the templates.

Open your settings.py file and make the following changes as-

We just have added the app inside our installed app.

You will get the output screen immediately which will look like- 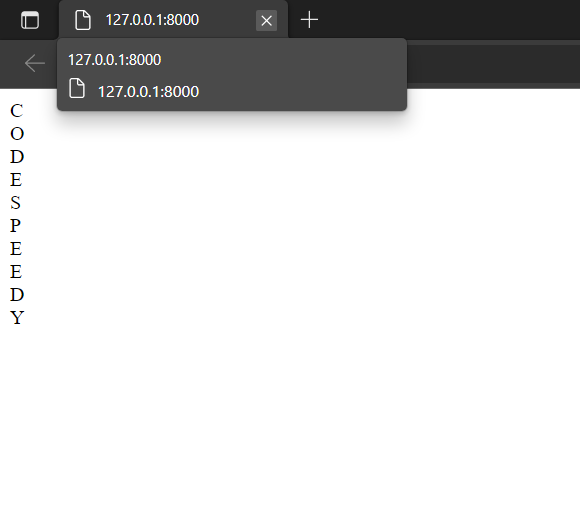 So, we have successfully iterated over our array of elements. I hope you enjoyed reading this tutorial, feel free to comment and share your reviews.