In this article we are going to learn Java Exceptions, Errors , How to handle those exceptions, different types of exceptions with some easy and understandable examples.

What is an exception?

Every application or program has its normal flow , but sometimes the normal flow of the program is disrupted. An exception is nothing but a reason behind the disruption of the program or application.
So for exceptions or exceptional events occurrence the program is going to be terminated abnormally.
Now you might think that this is ridiculous for the programmer as when the exception occurs we usually get an error message which is system generated. But nothing to worry as these exceptions can be handled. We will learn those process step by step later in this article.

Reasons of exception in java :

and there is a lot of other reasons too.

Types of Exceptions with examples:

Lets see an example of checked exception  with easy coding

suppose you are trying to read a file by using FileReader, but the file does not exist in the specified path. In this situation  FileNotFoundException will occur.

try to compile the above code , you will find out the below message

lets take an example. you have declared an array of size 3 and you are trying to reach at the 4th element, you can say its not possible as the size of the element is 3. so if we run this program it will show us an message.

This exception is known as ArrayIndexOutOfBoundsException. 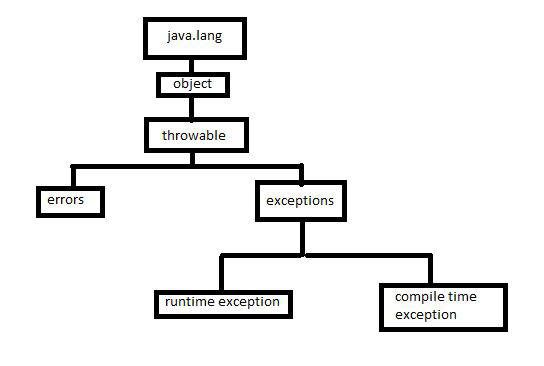 Errors are basically those serious problems which should not be handled by the application. example : memory errors, JVM errors.

generally you can do nothing  in your code to control errors.

java exception handling is nothing but a mechanism to resolve the exceptions that might be occurred.