Hey guys!! In this tutorial, we will learn about apriori algorithm and its implementation in Python with an easy example.

What is Apriori algorithm?

For example, say, there’s a general store and the manager of the store notices that most of the customers who buy chips, also buy cola. After finding this pattern, the manager arranges chips and cola together and sees an increase in sales. This process is called association rule mining.

The output of the apriori algorithm is the generation of association rules. This can be done by using some measures called support, confidence and lift. Now let’s understand each term.

Confidence: It is the measure of trustworthiness and can be calculated using the below formula.
Conf(A => B)=

Lift: It is the probability of purchasing B when A is sold. It can be calculated by using the below formula.
Lift(A => B)=

Since there are no other sets to pair, this is the final frequent item set. Now to generate association rules, we use confidence.
Conf({Chips,Milk}=>{Cola})=

The set with the highest confidence would be the final association rule. Since all the sets have the same confidence, it means that, if any two items of the set are purchased, then the third one is also purchased for sure.

Problem Statement:
The manager of a store is trying to find, which items are bought together the most, out of the given 7.
Below is the given dataset 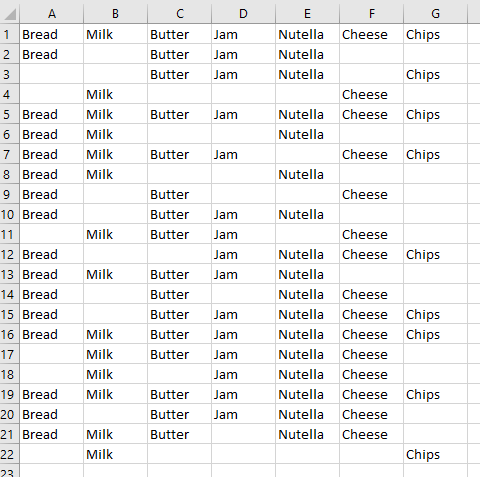 Before getting into implementation, we need to install a package called ‘apyori’ in the command prompt.

This is how we can implement apriori algorithm in Python.

3 responses to “Apriori Algorithm in Python”